Last year a film was released called Three Identical Strangers by Channel 4 and the film premiered at the 2018 Sundance film Festival where it won the US documentary special jury award for storytelling. This year, Channel 4 showed the documentary on tv. I had read an article about these three identical strangers earlier this year in the Daily Mail. I watched the film, because the trailer intrigued me, and I think you need to too.

If you haven’t seen it, you need to.

In a sense I don’t know where to start.

What starts as a happy story which feels like the perfect fairytale ending, adds a lot of dark, upsetting, unbelievable, terrifying and mind-boggling events.

If I told you the story, I don’t think you’d believe me, because the story is so unbelievable, you’d almost think that it was just made up.

Three Identical Strangers is a 2018 documentary film directed by Tim Wardle and staring Edward Galland, David Kellman and Robert Shafran. The unbelievable true story about three baby boys, who in 1961, aged just six months were vgiven up for adoption and adopted by three Jewish families around New York. The boys were monitored for the next two decades by scientists who never revealed the reason for their separation. The boys didn’t know of each others existence, their adopted families didn’t know that they had identical brothers or that they were part of a never released psychological experimental study.

But by complete chance, when one of the brothers attended his first day at college, often been mistaken as someone else, realised in fact that he may have a twin, their lives would change forever.

This incredible story made the papers, with pictures and prompted the third triplet to get in touch. It was outrageous, amazing, confusing, flabbergasting. Soon the three boys were national celebrities, everyone loved them, women adored them, Madonna even gave them a cameo in her 1985 movie Desperately Seeking Susan. They lived the life of Reilly.

They were so famous, they often appeared on chat shows or as guests on a panel whilst people asked hundreds of questions, baffled by their similarities but only just knowing about each other. They dressed the same, smoked the same brand of cigarettes, spoke the same way, moved the same way. Everything about them was identical.

In the documentary, you have a first hand look of each child growing up through personal family films and pictures. Bobby, Eddy and David each had a different relationship with their own families and the life they lead up to being united and the life they had together after, gave a somewhat disturbing truth into the reality of what happened those 19 years prior when they were adopted and separated at 6 months.

I won’t even lie, parts of the film, I did stop and pause it because it just seemed too dark, too fucked up, too crazy, to even be real. And it all had something to do with this Austrian Doctor who fled the Nazis to America before devoting his life to this twisted fucked up investigation into nature vs nurture. Who no one really could find out the truth about why it was done really in the first place, and what were the results – a struggle the boys are still facing in the present day.

In the middle of the documentary, we meet one of his research assistants, her name Natasha Josefowitz, who has a very fruitful medical career, meeting the likes of Al Gore, Michelle Obama, Robert Redford and Barack Obama. As sweet as she is, she seemed to be all too happy that it was somewhat normal for a case like this to be acceptable. She talked highly of the Austrian doctor, and didn’t seem that phased by experiment as a whole. 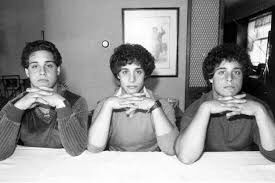 The film is fascinating and disturbing.

I don’t really know how I feel after I’ve watched it being a parent myself. But the idea that this was seen as normal to whoever funded this project and allowed it to go on for years unknown, with possibly many many other identical twins or triplets in America not knowing that they have identical siblings. It angers me and baffles me and flags up hundreds of questions, that although it doesn’t relate to me, makes me wonder just what will some people do in the name of science?!

It’s just heartbreaking. Not only do we meet Bobby, Eddy and David, we also meet identical twins Elyse Schein and Paula Bernstein who were also separated as babies for the same experiment. The film is beautifully shot and masterfully edited. The pain in their eyes as they spoke about each event that shook an impact on their lives, was felt throughout. There were a few times that I had to stop and pause the documentary, or rewind to certain stages because I misheard what someone was saying. Other moments, including when Eddy took his own life after being diagnosed with depression, a link apparently associated with their biological parents of not just the triplets but also Elyse and Paula, starts to make you wonder what other sinister reasons were behind this awful experiment.

I can’t begin to tell you the anger I feel just as someone watching the documentary and writing this blog post, being an outsider, and can’t imagine the pain, anger, upset and daily challenges Bobby and David must feel on a daily basis. On occasion, they both shrugged off certain events, but without knowing the full answers, and seeing the pain in their eyes, I can understand this.

Towards the end of the documentary it was noted that some articles from the experiments were to be released but the conclusion for the overall experiment hadn’t been concluded, therefore the results will never be known as to why and what was achieved from it as a whole. I hope that if there are identical siblings in America, or even worldwide that they are reunited.

It’s fascinating, a bloody good watch and equally something that flags up a range of emotions.