So apparently, not sure if you heard but not only is Kim Kardashian and Kanye West expecting their third child through a surrogate, aparrently her younger sisters Khloe and half sister Kylie are exepecting babies too. Whether the rumours are true or not, if they are I hope it’s not for publicity because a baby is for life you know, not just for TV ratings. Just saying. Was it a shock that potentially the world’s most annoying family famous moreso for Kim sleeping with pop star Brandy’s younger rapper brother Ray J, rather than their late father who gained national recognition as O. J. Simpson’s friend and defense attorney during Simpson’s 1995 murder trial. Possibly not, because this family will do anything to constantly stay in the press. It’s shocking, but true. But as it’s been proven, sex sells.

Kim’s rise to fame began in 2007 with a “leaked” sex tape starring her and rapper Ray J. But who knew that 10 years later that Kim herself would be a household name and worth around $100 million. As much as I can’t stand the Kardashian family, they have managed to turn Kim’s sex tape saga into a marketers dream. They are everywhere. Kim never went to college, she dropped out of high school, she is a highly successful multifaced entrepreneur. Not only do they all star in a popular reality TV show produced by Ryan Seacrest, they have published books, launched popular mobile apps, have multiple clothing lines, additional shows on top of other shows, presenting talk shows, perfumes and some have graced Vogue amongst lots of other avenues too. It’s madness how well connected this family are to being switched on and being able to be famous for well, being famous.

This family will and have done anything for fame. In recent years topics of conversation surrounding the family include Kylie Jenner’s drastic cosmetic transformation which she denies or the fact she dated her now ex-sister-in-laws-ex-partner Tyga, Bruce Jenner’s transition to a woman, now known as Caitlyn Jenner, momager Kris Jenner’s relationship with her toyboy half her age, Kendall Jenner’s rise to fame as an international supermodel and Rob’s disastrous relationship with former stripper Blac Chyna. What this lot will do for fame is endless. I’m hoping that with the recent news, all rumours whichever one you want to believe, that if Kylie and Khloé are in fact pregnant that their children won’t be used as pawns in the next level of their reality world. I suppose one great example of that is the current feud between Rob and Blac Chyna involving their daughter Dream. Blac Chyna is currently suing the Kardashians for loss in profits and claims the “vindictive” family wants to destroy her after she split with Rob last year.

After new spread last month of the youngest member of the Kardashian – Jenner clan, Kylie is reportedly pregnant, American magazine People reported that Khloé Kardashian is reportedly also expecting her first child with her boyfriend, basketball player Tristan Thompson. Some﻿ say that she is five months pregnant and others are saying that she is expecting a baby boy, whatever the report I do wish them good luck but I hope that they’re going to be 100% committed parents and their child won’t be used as a bargaining or publicity tool for a new reality tv series or gosh, something else. Having a child is serious stuff. It shouldn’t be taken lightly and seeing as there are so many youngsters who look up (God knows why) to this family, getting pregnant quickly shouldn’t be publicised as easy peasy shit because it’s not.

Having a baby is hard work. It can test your patience, relationship, mental stability but overall, beyond the baby sick, explosive nappies and sleepless nights it’s one of the most rewarding things to happen in your life. Having a baby is a beautiful and wonderful thing but it does throw in every type of emotion that one person or a couple can give. Beyond it being hard work, it is very rewarding and Emily is the best thing that has happened to me and our family.

Please don’t look at the Kardashians as role models. Whatever your views on the Kardashian’s, the antics of America’s most camera-friendly family is talked about constantly. Kim alone has been accused of leaking her own sex tape, faking her marriage to Kris Humphries and most recently staging the robbery in Paris last year. They all live in a fame-hungry bubble. I highly doubt Robert Kardashian wanted his children to be famous off a leaked sex tape and the fact that momager Kris Jenner helped Kim release the sex tape and star in nude photo shoots isn’t what you’d call a traditional form of parenting. Kanye West doesn’t exactly appear to be stable enough to be a father either and all of them live in a surreal world of extortionate money and fame, exposing anything and anyone for an extreme slice of apple pie. That and the ridiculous ways Kourtney and Kim raise their children in their surroundings also seems absurd. No parent is perfect. You have to find your ground and it does take its time, but I don’t know many if any people who look up to the Kardashians and say they’re good parents. Kim’s children alone are probably arguably the most recognised children on the planet in the world of celebdom.

So here’s what the Kardashian’s should stop doing with their children:

Stop using them as accessories

Can anyone remember when Ozzy Osbourne’s wife Sharon accused Kim of treating eldest daughter North like a fashion accessory? In an interview with British celeb gossip magazine Closer in 2015, Sharon, known for her honest opinions voiced hers loud and clear that North should be a child and not an accessory, in response to North being pictured out and about in a fur coat. You would’ve thought that Kim and Kanye would do the responsible thing and promote wearing faux fur as a thing rather than wearing the real deal but you can’t really be surprised that they don’t actually give a fuck.

Keep them out of the constant spotlight 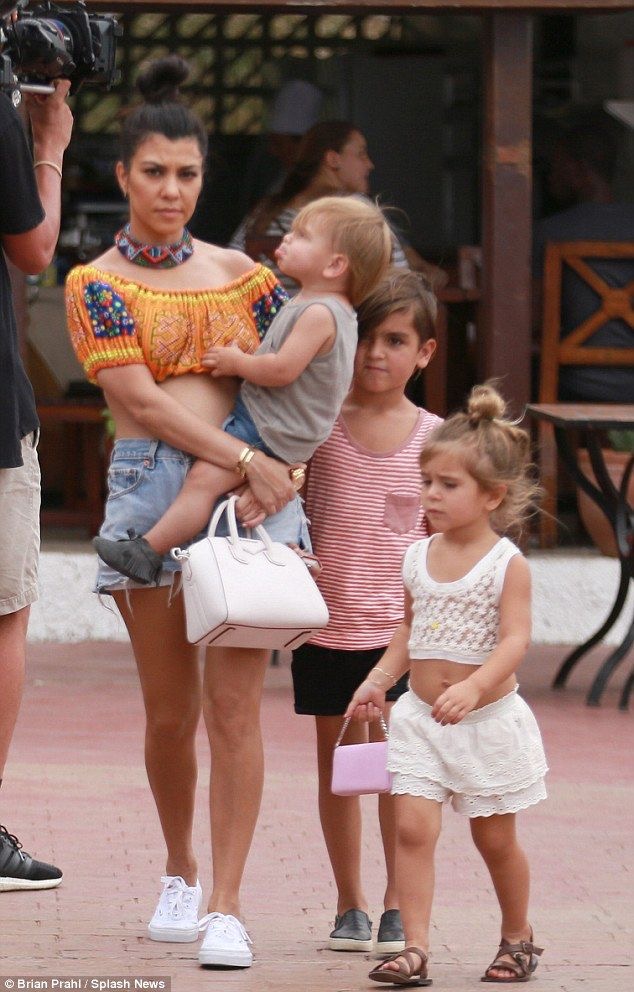 Failing to be like other celebrities who keep their children out of the limelight, the Kardashian’s couldn’t thrust their children any closer into it. Kim constantly includes her kids in her SnapChat stories and Instagram posts. Along with her sister Kourtney, they do love to show off their kids at any given moment. This also includes all members of the family who’ll do anything to show off their children online and in their reality shows. Whilst most parents like to keep their child’s development and progress either online through Facebook or other channels, some choose not to and that’s fine. Every parent who has grown up in the social media age knows about the constant worry of privacy which as it has been proven clearly doesn’t apply to this lot.

If anything you’d want to think your parents claim to fame was down to one of the most talked about murder trials of the 90’s not that one of your family members slept with a rapper and realised it to the press. It’s already been known, since their claim to fame that none of them are exactly good role models. But without a doubt Kim wins on the worst role model out there. Well done Kimmy. Always in the spotlight, putting emphasis on that figure of hers, batting off speculation that her arse is hers and not cosmetically enhanced, giving young girls the world over the unrealistic assumption that designer clothes, hair extensions, make up and contouring kits are the way forward and will transform you into a glamorous darling that bags you a celebrity pop staror sportstar boyfriend, when in reality, all she’s doing is making tonnes of cash off you and nothing more.

Does anyone remember when she posed naked and then ripped teenage actress Chloé Moretz to shreds when Moretz said she was a bad role model? In 2016 Kim shared with the world a naked selfie, because why not and a lot of celebrities were pissed and rightly so. This included actress Moretz who urged Kim to teach girls that they have “so much more to offer” than just their bodies.

“@KimKardashian I truly hope you realize how important setting goals are for young women, teaching them we have so much more to offer than just our bodies,” read the tweet.

Kim responded with “let’s all welcome @ChloeGMoretz to twitter, since no one knows who she is. your nylon cover is cute boo.”

Moretz hasn’t been the only one who’s questioned Kim, others include screen legend Bette Midler, British TV presenter and journalist Piers Morgan, and singer Pink!

Chill out with the designer gear 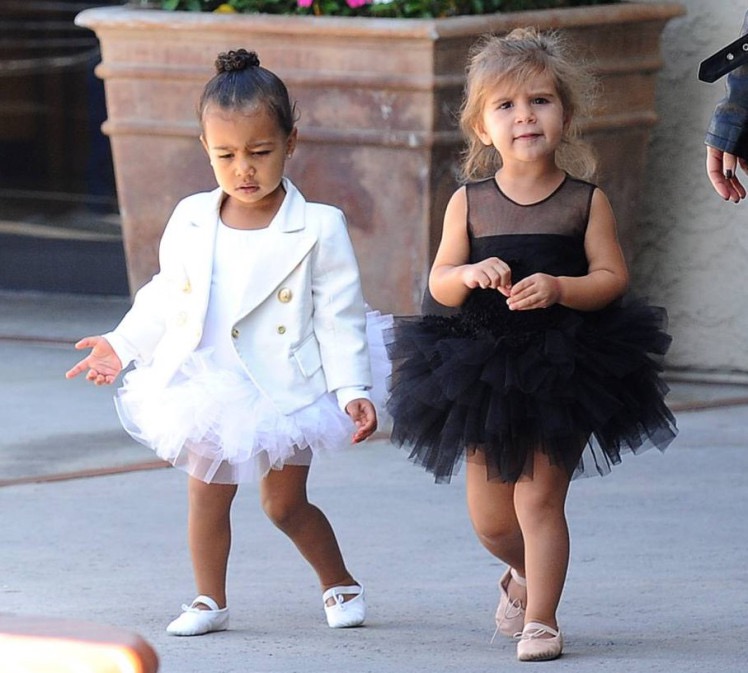 There is nothing wrong with dressing up your children. What you choose to dress your children is entirely up to you, whether that’s in labels or not. Kris Jenner’s grandchildren probably have wardrobes most adults would kill for. North Kardashian West (4yo) has often been photographed wearing thousands of pounds worth of clothes. She’s been photographed strolling around NYC with a $1k Louis Vuitton bag and wearing her dad’s Yeezy designs, Adidas, Vans, Alexandra Wang, Roberto Cavalli and many couture too. Her brother Saint’s wardrobe is a mini version of his famous dad’s wardrobe too. Not bad for a 2 year old.

Other Kardashian’s grandchildren to been seen decked out in gear include North’s cousins, Mason (8yo), Penelope (6yo) and Reign (3yo).

They can’t seem to just be photographed in their PJs or looking like shit, like ever. For whatever reason none of them seem to like clothing very much and even when they do, it doesn’t seem to cover much areas of their bodies. Kim as always loves showing off her body, most of the time in the raciest of outfits or in photos that would look better in lads mags. The rest of the Kardashian-Jenner clan have been known to post across their social in less clothes than on too. Whether they are getting paid for it or not, there should be a rule for how much they post wearing skimpy outfits.

The list goes on with the ridiculous things this family will do for fame, but hopefully Tristan or Travis will see beyond the fame and shelter their offspring from the glaring eyes of the world’s media. But then, how long is a piece of string?