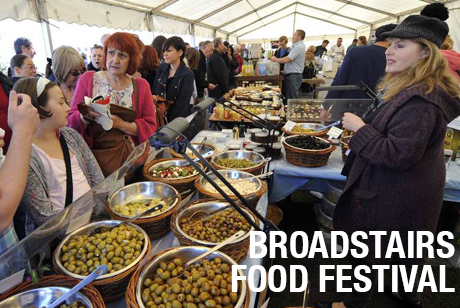 I’m really excited. This weekend is none other than the Broadstairs Food Festival. Whilst this will be my second visit last year was a little difficult enjoying myself, but now that Emily is here, I can push her around in the buggy and really take notice of what’s on offer rather than needing a breather every 5-10 minutes. For those of you who don’t know, the Broadstairs Food Festival is a yearly event that celebrates Kent’s flourishing food and drink scene. Around 50k food fans flock to the area and has been a hit with locals and tourists since its launch 8 years ago.

The Broadstairs Food Festival is back for 2017 with a tempting mix of delicious regional food and drinks, chef demonstrations, workshops and fun for all the family.

Set in the beautiful coastal town of Broadstairs in East Kent, from Friday 29th  September to Sunday 1st  October, the 3-day event is a foodie’s heaven, celebrating the very best food, drink and culinary skills in and around Kent. Expect an exciting range of produce that will include raw milk, organic vegetables, sourdough bread, Kent cheeses, pickles and preserves alongside award winning beers, ciders, spirits, and delicious freshly cooked street-food.

Since the beginning, in 2009, our aim has been to celebrate and promote the amazing variety, quality and abundance of food and drink produced in Kent and to encourage people to buy local produce in the shops, farm shops and other farmers markets. The festival offers not just this but also the opportunity to meet the producers of that wonderful cheese – or the baker of your speciality bread and pastries.

Last year I bought some great gifts for mum who loves cooking including a great 4 piece selection of Kentish oils including her favourite the garlic oil and some delicious homemade fudge for my grandad. Sam decided he couldn’t resist the game tent and settled on the world’s smallest and most expensive duck, that, once cooked seemed to only really stand out to feed the borrowers and a squirrel that’s been sitting, hidden under a pack of frozen peas since last year. Don’t even ask! Let’s hope he doesn’t read this post and has forgotten about it!

This year’s exhibitors include:

I’ll let you know what delicious treats I’ve bought this time, but if you are thinking about doing anything this weekend, make it be this!

How to get there: Victoria Gardens, Broadstairs. CT10 1QL

For times and ticket information visit: